Part 5: The Journey to Jekyll Island

Part 5: The Journey to Jekyll Island

The fascinating account of the clandestine gathering of financiers at Jekyll Island as presented in The Creature from Jekyll Island by G. Edward Griffin is quoted directly…

“The New Jersey railway station was bitterly cold that night. Flurries of the year’s first snow swirled around streetlights. November winds rattled roof panels and gave a long, mournful sound among the rafters.

“It was approaching ten p.m., and in their hurry to board the train and escape the chill of the wind, few passengers noticed the activity at the far end of the platform. At a gate seldom used at this hour of the night, all alone sat a long private passenger car with gleaming black paint accented with polished brass handrails. The shades were drawn, but through the open door, one could see mahogany paneling, velvet drapes, plush armchairs, and a well stocked bar. On the center of each side of the railcar was a small plaque with a single word: ALDRICH.

“In 1910, Senator Nelson Aldrich of Rhode Island was one of the most powerful men in Washington, D.C. But Aldrich was much more. He was a spokesman for big business and an investment associate of J.P. Morgan with extensive holdings in banking, manufacturing and public utilities. His son-in-law was John D. Rockefeller, Jr. Sixty years later his grandson, Nelson Aldrich Rockefeller would become Vice President of the United States.

“While Aldrich was easily recognized by most of the travelers who saw him, the other faces were not familiar. These strangers had been instructed to arrive separately, to avoid reporters, and to pretend they did not know each other. After boarding the train, they were told to only use first names. No one was to know the names of the guests.

“No sooner had the train cleared the platform when it shuddered to a stop. Then, to everyone’s surprise, it reversed direction and moved back into the station to pick up another car at the end of the train. And so, as the passengers drifted off to sleep to the rhythmic clicking of steel wheels against the rail, little did they dream that, riding in the car at the end of their train, were six men who represented an estimated one-fourth of the total wealth of the entire world. The roster in Aldrich’s rail car included: 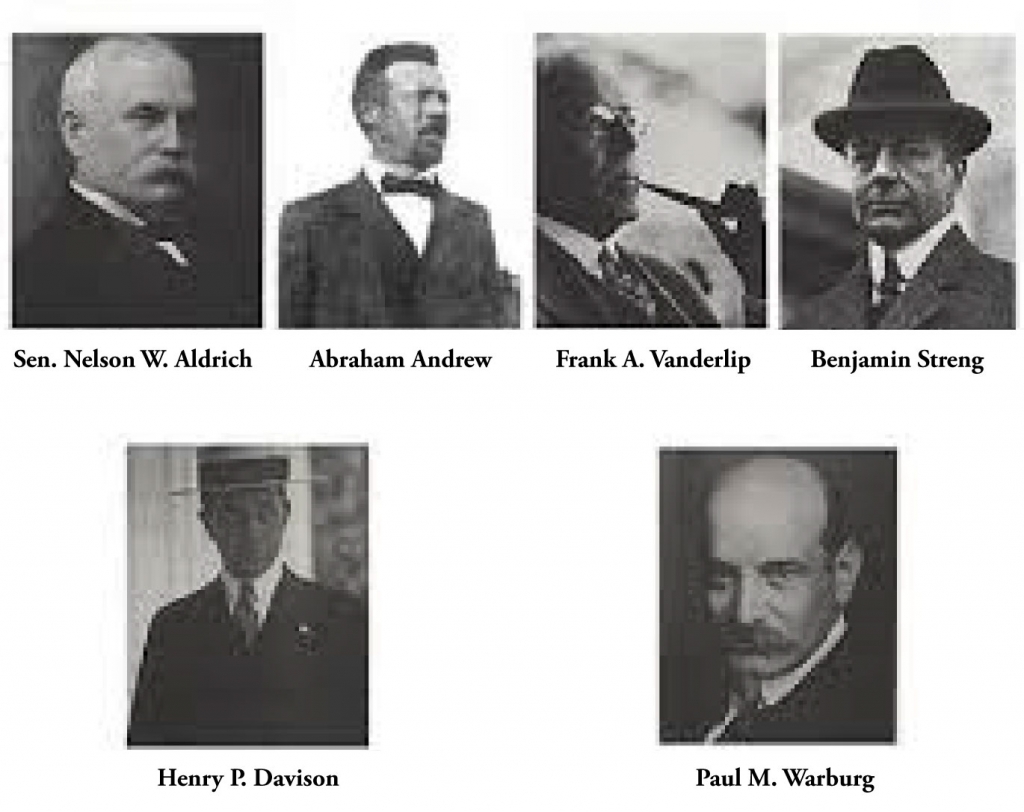 “The eight hundred mile journey ended in the small town of Brunswick, Georgia. Curious local reporters greeted the elegant passenger car at the Brunswick station, but they were readily informed that the travelers were just friends who had come for the simple amusement of duck hunting on a small private island owned by J.P. Morgan and several of his business associates called Jekyll Island. Satisfied that there was no story, the reporters returned to their office.”[1]

The plan had worked to perfection.